taking my sweet time to update my blog is that I now have about a dozen different things that I want to share! I'm not even going to attempt to put things into a chronological (or even logical for that matter) order as I might just throw up my hands and go eat strawberry crumble coffee cake instead... here, look at some beads...

(ok, I actually did take a break here to eat dinner and previously referenced strawberry crumble cake) I must say that my CSA box has been keeping me quite busy... had to use those organic strawberries before they mushed and I have banana date chocolate chip loaf cooling right now too!

Moving on... Apparently the rock I've been under has not had a copy of Chain Style under it with me. I found it at my local library after a customer order named it as their referral source and discovered a lovely necklace created by the talented Lorelei that shows off one of my Patina Batik pendants. Woo Hoo! 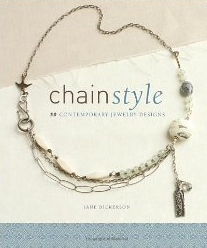 Of course no amount of gentle questioning could pull out why he thinks I'm Tinkerbell (and no, the last time he saw me I did not have my hair in a bun while wearing a short green dress!) 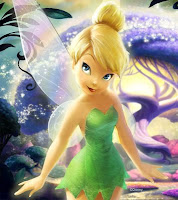 Now as someone who has never been mistaken for petite (I'm 5'10"), I'm conflicted between feelings of complete bewilderment and total delight that this boy (whom I haven't seen in about a year and a half) has suspended belief to the extent that I can be Tinkerbell in his mind. It pretty much made my week and I'm just not sure that anyone/anything else will be able to top it for quite some time! 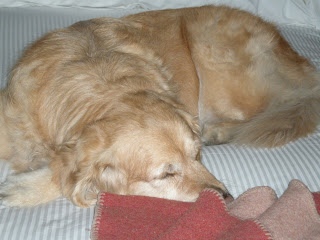 We took a nice trip for spring break out to Sedona that ended up being cut short due to a canine shoulder injury. Pupper played a little too vigorously with a fluffy pal at the dog park there and apparently tweaked a muscle. After realizing that she really couldn't do more than a short walk out to the grass and back without dramatic limping we decided to head back a day early. As you can see it didn't stop her from getting up on the bed for her naps! Of course after resting for 7ish hours in the car on the way home she was fully mended and back to bouncing around the next day. 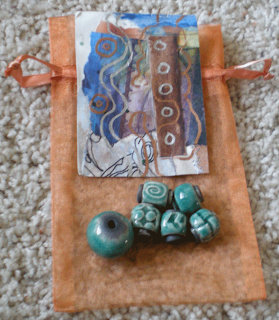 I spend a lot of time sending things out, so whenever a package arrives here it's a wonderful treat! The other day I discovered that I was the lucky duck winner of an assortment of Keith O'Connor beads from Andrew Thornton. I was very surprised to have an envelope in the mail today already with them inside! They're really a lovely deep aqua shade, so gorgeous and they were accompanied by a beautiful art card of Andrew's. Thank you so much again Andrew, I feel so fortunate!

On the muddy front, I have been doing some glazing, firing and posting of items...really...just not at the speed I would like. I did get a couple of bracelet bars in the last kiln load along with a few nice big chunky lentil beads.

Well, how was that for a nice random assortment of blog topics all rolled into one post? I need to finally wrap this up (I started about 3 hours ago!) and see if the loaf is cooled enough to wrap up. Hubster runs a 5k tomorrow bright and early as a warm up to his next 1/2 marathon in 2 weeks (yep, he runs...I bake).
Posted by Mellisa at 6:59 PM