BUNNIES!! I giggle every time I see this, how can you resist carrot chip poker playing bunnies?

On to non-flop earred topics...I finally managed to carve out time to post all the items from my kiln firing 3 weeks ago (yes, three and I'm not sure I even have a good excuse!) so they are now finally on my website. There's another firing as I type so maybe I'll be faster in my posting of the next batch! What do we have this time around? I restocked my keys...

Posted some rectangular cut out pendant/toggle/links...

And ended up with some interesting glaze variations... I've been experimenting with a new clay body and several of my "tried and true" glazes are turning out quite different than in the past. This is my Avocado glaze...to me it looks a bit like day old guacamole on this clay but I do think it's interesting...just not what I was expecting.

In other news, it sounds like I may have an item or two in Interweave's Beads 2010 issue. It's available here for pre-order. Squinting at the enlargement of the cover it appears that clay is well represented in the issue! 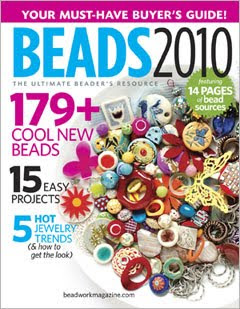 Unfortunately I don't think any of mine made the cover from what I can see... but I also must admit to a serious last minute effort in my submissions, I don't know what I was thinking! I'm super excited to see the issue in person in the next couple of weeks.

I really need to crack down on my procrastination for submissions...anyone want to take on the pro bono position of official whip cracker?
Posted by Mellisa at 7:54 PM