A couple of very nice surprises this week (and one not so great surprise!). First the nice... I received an email from Michelle Mach (of Beading Daily fame) to let me know that she used one of my peacock butterfly pendants in a necklace that made it into Creative Jewelry 2009. 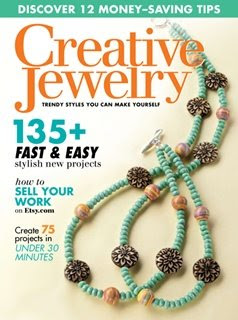 So, I decided to splurge and pick up a copy (for my "media mentions" collection). As I was flipping through the magazine I discovered that Lorelei's necklace using my peacock sari leaf pendant that I blogged about a few posts ago-here- was also in the issue! Last but not least in the same issue there was an article about selling on Etsy that included an interview with Lorelei and her earrings using my deep coral bead caps were pictured. 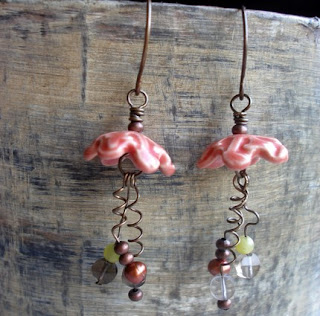 I haven't mentioned it lately but my offer stands...if you get a project published that uses one of my beads or pendants and I'm listed as a resource for supplies, make sure to let me know and I will send a little reward your way!

Now, as far as the not so great surprise goes... This week we had 55 pounds (yes, you heard that correctly, 55 POUNDS) of honey bee hive removed from the space between the roof tiles and insulation of our roof. Technically it was portion of our building's roof that is over our neighbor's but as it overhangs our front patio we were the recipients of all the air traffic and many sharp ended bodies. According to the guys who came out to deal with the colony, they have already dealt with over 20 of these situations, just in our complex, this summer! I keep hearing about the honey bee population declining (although the guys said it's more of an East coast problem-interesting) but if they keep choosing to build in people's attics I don't have high hopes for them! 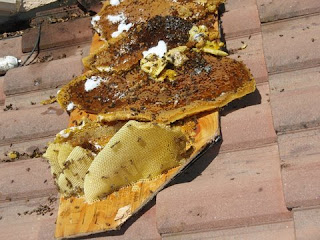 Well, I have a humongous pile of bisque that came out of the kiln this morning that must be glazed so I better hop to it. I should have lots of new work to show off by Wednesday!
Posted by Mellisa at 12:28 PM