Procrastination is my Middle Name...

but at least I know I'm not the only one out there! I had a reminder email to myself in my inbox since September so I would not forget to send some beads in for Interweave's Beads 2010 issue. I completely missed the boat last year and did not get anything submitted at all and had vowed to send things in this year. With only a few days until the deadline I realized that I needed to send some pendants in, resulting in a mad scramble and cannibalizing of the best items from my most recent firing! (Clearly sending reminder emails to myself is not the most effective strategy)

Keep your fingers crossed that something makes it in after that, the negative is that submitted items are not returned so it's a bit of a loss if nothing gets in.I also received an email from Stringing magazine letting me know that someone (??who are you??) had a project using one of my components accepted for the next issue. As a result they contacted me to see if I wanted to get in on the new Artisan Beads advertising section. Several years ago I participated in some group advertising efforts with limited success (of course I thought my pictures were kind of lame which could have been part of the problem!) but this seemed like a good time to try it out again. Although it's definitely an investment, the Artisan Beads section is quite a bit less expensive to advertise in than the usual options.

Last but not least I leave you with the most recent sewing project (but probably the last for a while)... a yoga mat bag I made for my mother. Again, the pattern is a wonderful freebie from Amy Butler Designs. The inside is lined with aqua fabric and the sides of the bag have three pockets for a water bottle, etc. 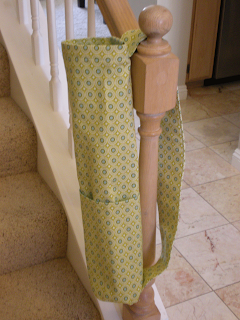