Maybe it was the Full Moon...

that caused my first baking failure in ages! I am usually the undisputed Queen of Cookies in my neck of the woods, however there was most certainly a cookie malfunction last night. I saw a recipe for mocha cinnamon chocolate chip cookies in the Costco magazine...not my usual go to for recipes but the photo looked a-mazing! (I figured with three sticks of butter they must be phenomenal too) Midway through creaming the butter I realized that the recipe didn't call for egg...how can a cookie recipe have that much butter and no egg I wondered? So I decided that improvisation was in order and added an egg... the first tray out of the oven was still a pancake thin butter fest so I added more flour as well...slightly closer to something resembling a cookie but more like a super rich tart crust pastry. So, lesson learned...stick with the tried and true choc chip recipe but I do think that my next batch will have the twist of the mocha cinnamon flavors...this might become my new "signature" cookie :) 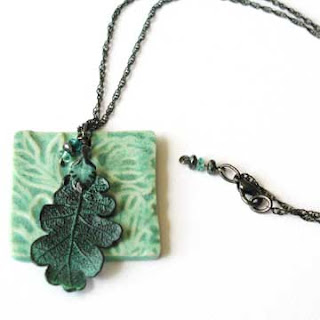 Ok, on to the non-edible baked goods...or more accurately fired goods! I was thrilled to receive a box from Bead Trends last week with the February issue. The necklace I submitted was really quite simple but I just love how it turned out so I'm thrilled that it was selected.

Not too much else to show off right now, the kiln is firing away so there will be more to show this week. I managed to sneak a couple of buff stoneware pendants into this load, I haven't done anything in stoneware for months so it will be interesting to see some of my new designs in those shades.

Next task for the day, the washing of the dog...kind of up there with the running of the bulls!
Posted by Mellisa at 10:05 AM