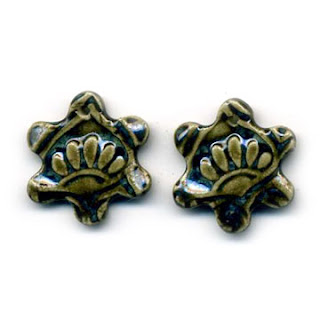 blech...woke up with a sore throat and general feeling of ick today. As tempted as I am to blame my new running plan, I'm pretty sure it's more a product of "run down". So, there will be no cleaning for the next week, I will not bake, the toenail polish color won't change, and anything else I can cut out for the next few days will be chopped. That will probably mean that I'll be extra slow in getting things up on the website so if you see something you like just let me know and I'll put it aside!

I don't usually make beads but had a special request for beads to coordinate with some pendants...I actually enjoyed making them enough that I think I'll add them in as a regular offering. Maybe even square ones too! 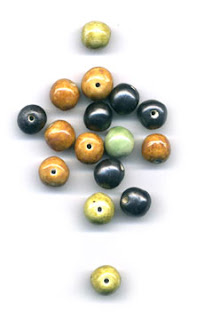 I also made these large circles, 2 1/4 inches across and have a few extras...wouldn't they be fantastic as a focal for a multistrand necklace? 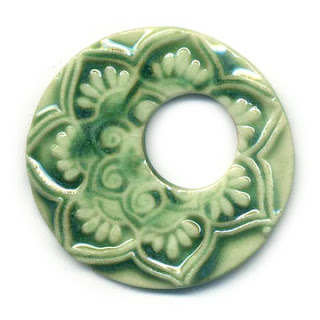 I have a few more firing away right now in the kiln...the kiln which is bound to blow out its elements in the next couple of firings, it's taking forever to complete a glaze firing at this point. If I were smart I'd order the replacement elements now but since I'm on extra work strike right now I'll wait until the sniffles are gone. On that note...I'm going to make a nice big cup of tea and put my feet up!
Posted by Mellisa at 2:44 PM