...with no new beady pictures to share- horrible, right? I've been doing so much running around trying to get all the mundane daily stuff taken care of before my final days of summer slip away that I have hardly had a moment to get my hands into the clay (normally I would say put my hands in the dirt but my hands have certainly been dirty, just not with clay!). 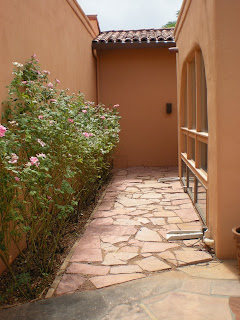 For those (one or two) of you who might be interested in the non-clay fruits of my labor over the past two weeks, I present.... almost three tons of flagstone!!! Ta Da!! 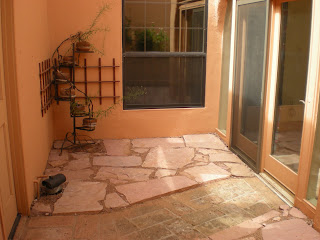 I'm not really sure what I was thinking when I suggested to the hubster that we put it all in ourselves over a weekend. No, I was thinking "this won't be too hard at all". That was before the 65 ft flatbed semi pulled up in our Sedona cul de sac (and took a very long time to turn around and get out!) and unloaded two pallets of flagstone into our garage with a forklift. Somehow the rock yard guy's description of "two inch thick" flagstone was not the same as my visualization of what two inches thick would look like. So, we carried, smashed and placed pieces of flagstone that varied from about 50 pounds to well over 100 pounds each. Thank goodness hubster liked the end result or I would still be hearing about it! 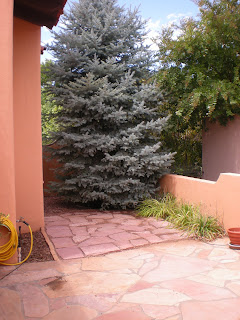 The much less strenuous and slightly more glitzy project came from when my parents visited right before our trip out to Sedona. We put a glass mosaic backsplash in the kitchen to replace the white, painted over backerboard that was really quite awful but since it was white you didn't really notice that it was painted composite stuff, you kind of had the illusion that it was tiled. All I can say is that it was BLAH! Although hardly what I would call a professional job on the glass mosaic, I am completely happy with it and my little kitchen looks like it now has a good personality at least. 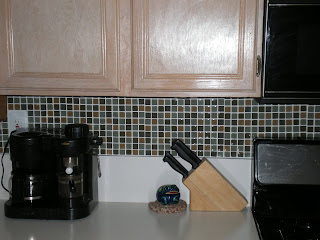 Next summer, re-tiling the fireplace surround and refinishing kitchen cabinets I think!

Now in my dwindling summer break time I intend to read at least two more books - I have today and Tuesday to make it happen!
Posted by Mellisa at 11:34 AM