you begin the blog post with lovely eye candy. Or at least this is the approach that I'm choosing to take today...which may be misconstrued as denial but really should just be interpreted as avoidance. 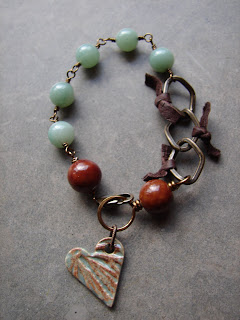 This lovely bracelet is by Shannon of For My Sweet Daughter. I love how she echoed the colors in this Robin's Egg Abstract Butterfly pendant but I also think the design is great...not too fussy but enough little details to be special.

In further delay of my traumatic story of gore I will let you know that I have added a whole bunch of new pendants, beads and caps to the website.

Look, aren't they shiny and pretty? But there were a few dud pendants that curved on me because of rushing...

I thought the glaze turned out great though so I hate to just scrap them...anyone interested in a giveaway of slightly wonky curved pendants? If there's enough interest I'll do a giveaway next post.

So for those of you who are squeamish or just don't want to hear my whiny tale of woe, stop reading here, leave me a comment that you do/don't want wonky curved pendants, and check back on the next post...

What a day yesterday! Mid-way through my morning I feel a little something moving around the back of my upper molar. At first I thought it was just a piece of granola bar or something but then realized it was much too large and it "kind of" hurt. So I finally realized that part of my tooth had broken and called my dentist. They got me in near the end of the day and told me that it was completely crazy that a chunk of my tooth would completely shear away when there wasn't decay present. What can I say, I don't do things halfway...if you're going to be a tooth grinder you might as well create nice deep molar fractures while you're at it!


The dentist pulled out the broken chunk **gore alert** which had pieces of pulp attached from the root. Since the root was hit and the break went all the way below the gum line I had two choices…root canal, gum surgery which might have to include some bone removal, and a cap or pull the tooth and decide after it heals if I want to proceed with a dental implant.

After some discussion between both dentists in the office (husband and wife team) we decided it was best to pull it, but since the root was exposed they figured I was going to be in terrible pain until it was pulled... so they called the oral surgeon who said his next opening wasn't until today at 3:30! The dentist called him back and apparently did some sweet talking (the wife, not the husband)... the surgeon called his babysitter to stay late and I had to zip across town to his office asap.

End result... numb face, hole in the mouth and prescriptions for super strength ibuprofen and percocet. I was foolishly optimistic that I'd be back to "normal" today but it still hurts too much to eat or talk so I'm benched for at least another day or two. Most frustrating for me, unproductive time as it's just too darn uncomfortable to move much.

Wow, thanks to any of you who decided to stick it out with me to the end of the post! The moral of this story...ok, there's no moral but at least I can say that I'm very thankful this didn't happen while I was eating and drinking my way through Napa and Sonoma!

Next post...something uplifting when I'm no longer medicated :)